Harper and the Fire Star is a beautifully written story full of mystery, secrets and musical magic. We were quickly drawn into Harper’s adventure, captivated by the colourful characters in The Circus of Dreams and intrigued by the mysterious Fire Star. We couldn’t stop reading until we got to the end of the book! 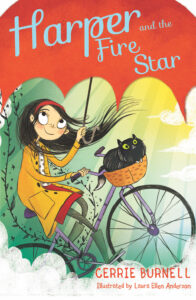 The Story: The Wild Conductor puts on a fabulous show to try and get into The Circus of Dreams but things don’t go as planned and instead Harper and her cat, Midnight, are taken away by Othello Grande, the ringmaster. A fast paced, magical adventure follows as Harper’s friends race to find her and Harper accidentally discovers Fire Star who is living in a strange grey world without music.Harper and the Fire Star’s easy to read, lyrical prose is as musical as the story. We love the setting of this adventure – a circus which includes a chocolate forest, a sea-singer and a children’s orchestra. The Circus of Dreams is suspended in the sky, umbrellas can help you fly and Harper is joined by a diverse cast of characters including the villainous Othello Grande whose dislike of The Wild Conductor has played a big part in Fire Star’s story. The two men’s turbulent history has led to Star’s situation and Harper risks danger to help her.We would love to hear the sound of The Wild Conductor’s cloudian, a musical instrument that flies through the air and plays a significant part in the story. Harper is so musically talented that she can pick up any instrument and play it, her circus act involves her playing a variety of instruments. Friendship is an important theme and Harper’s friends from the Tall Apartment Block, Ferdie, Liesel, visually impaired Nate and his wolf Smoke, make a risky journey to rescue her from Othello Grande’s clutches.Laura Ellen Anderson’s illustrations add more magic and vibrancy to the story, we love the pictures of Liesel, Ferdie and Nate pedalling towards The Circus of Dreams and Harper perched on her umbrella as she performs. But our favourite illustration shows Midnight playing the piccolo flute, he’s a musically gifted cat!Harper and the Fire Star is a wonderful celebration of music and the arts. With warm, likeable characters, fantastic illustrations and a large dose of magic this is a perfect first chapter book for independent readers.Age Range: 7+Author: Cerrie Burnell / Illustrator: Laura Ellen AndersonThank you to Scholastic for sending Harper and the Fire Star. We’re sad to hear that it will be the last Harper story.
Age 10, Age 7, Age 8, Age 9, Scholastic