Shifty McGifty And Slippery Sam Up, Up and Away! by Tracey Corderoy & Steven Lenton

We love the Shifty McGifty and Slippery Sam picture books, especially the first story in which Shifty and Sam give up their life of crime to become bakers. Now Tracy Corderoy and Steven Lenton have treated us to more exciting Shifty McGifty and Slippery Sam adventures in Up, Up and Away!, a chapter book containing three highly illustrated stories which are perfect for more independent readers to enjoy. 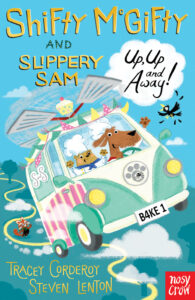 Up, Up and Away!: Shifty and Sam take part in a road race which includes their annoying next door neighbour, Red Rocket, who does his best to sabotage the race. Shifty and Sam’s eclairs save the day and ensure that Red Rocket’s attempts to win are thwarted. But who will win the race?To Catch a Thief: There’s a jewellery thief in town so Shifty and Sam go undercover at the hotel to protect Lady Poshington’s jewels. Disguised as a doorman and a chambermaid they use an exploding cake box and cake cams and are very surprised when they discover the thief’s identity.The Mystery Parcel: A dispute over a a mystery parcel causes an argument between Shifty and Sam who decide that a duel is the best way to solve their disagreement. Both dogs end up very wet before they discover who the parcel belongs to!There are cakes galore in these mouthwatering stories which are packed with fast paced action, intrigue, crazy inventions and excitement. Red Rocket, the villain in Up, Up and Away!, will stop at nothing to win the road race but he can’t compete against Shifty and Sam’s eclairs. We love the use of cake cams in To Catch a Thief and cakes and baguettes play a big role in Shifty and Sam’s duel over The Mystery Parcel. Shifty and Sam are joined in their adventures by a variety of characters, including Red Rocket, their friend Scottie, hotel manager Mr. Benson and Lady Woofington, we were also very excited when we spotted the spider that appears in Shifty McGifty and Slippery Sam.Steven Lenton’s illustrations are full of humour and varying shades of turquoise are added to the black and white drawings that accompany the text on each page. Choosing a favourite from the many wonderful illustrations isn’t easy but I love the pictures with Sam dressed as the chambermaid and my daughter thinks Red Rocket’s ‘vehicle’ is fabulous.The themes of friendship and taking care of others are predominant in the stories. Shifty and Sam are caring characters who look after Scottie when he is ill and we love the way that they help their friend Hercules in Up, Up and Away! But friends also argue and although we were amused by Shifty and Sam’s duel in The Mystery Parcel we were also happy when they realised how important friendship and sharing are.Shifty McGifty and Slippery Sam Up, Up and Away! is the perfect first chapter book for fans of this fabulous doggy duo!Age Range: 5 +Author: Tracey Corderoy / Illustrator: Steven Lenton
Age 5, Age 6, Age 7, Age 8, Age 9, Animals, Humour, Nosy Crow

24 responses to “Shifty McGifty And Slippery Sam Up, Up and Away! by Tracey Corderoy & Steven Lenton”