Age Range: 3 to 8Cat and Dog, the main characters in The Messy Book make us laugh! A mess needs tidying but who will do it and how many excuses will be given before it gets done? Parents as well as children will identify with the situation in this amusing story and my daughter chortled her way through our first reading and then immediately asked for it to be read again.The Story: Cat has made a mess. Dog suggests that she tidies it but Cat shoves it into the jungle which infuriates a group of animals so she then shoves it into the ocean. After more procrastination Cat vacuums the mess up but more mess is caused when the vacuum cleaner explodes. Eventually everything is tidy but the animals’ next activity causes another mess and this time Cat isn’t to blame!The two main characters in the story are very different but both very endearing. Cat is the messy character who ignores Dog’s requests to tidy up (including his suggestion of singing a tidy up song!) and procrastinates in every way imaginable – does that sound familiar?! They are joined by two penguins and a hat obsessed giraffe who contribute to the drama before helping with the tidying up. There’s also another animal hiding in the rubbish at the beginning of the story although we don’t find out his/her identity until the end. We love the way that the animals finally tidy up and the fun surprise (which we found totally unexpected and very clever) when the animals have finished tidying.The story is told through dialogue between Cat and Dog and is interspersed with hat related comments from the giraffe and the penguins. Cat pushes Dog to the absolute limit with her excuses, we find the page where Cat contemplates different ways of tidying up particularly funny and love the page where the mess and the animals are all wet. Richard Smythe’s wonderful collage illustrations include a wide range of muted colours on a white background and the range of expressions he has created on the animals’ faces brilliantly convey how they feel as the tension rises and the situation unfolds.Children and their parents will both find The Messy Book very amusing. Tidying up is such a familiar situation and this story includes mess, procrastination, shouting and exasperation before the problem is solved – albeit temporarily!Author: Maudie Powell-Tuck / Illustrator: Richard SmytheThank you to Little Tiger Press for sending us The Messy Book. It has already been read many times and we love the way that a familiar situation has been given such an amusing and original twist. 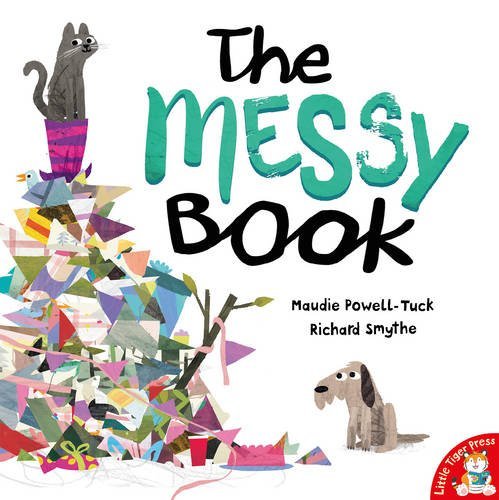