The Princess and the Giant by Caryl Hart & Sarah Warburton

The Princess and the Giant is one of our favourite picture books from those that were published last year. Not only does the story have a very independent minded, helpful and determined heroine but it also advocates the enjoyment that stories can bring and the joy of learning to read. 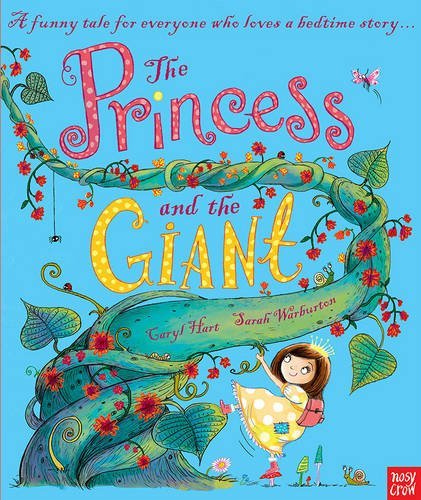 The Story: The giant, who lives at the top of the beanstalk in Princess Sophie’s garden, is keeping everybody awake with his snoring. Brave Princess Sophie climbs the beanstalk and tries various ways of helping him but nothing helps and the queen orders her soldiers to lock the giant up. However, Sophie gets there first and reads him a bedtime story. The giant wants more stories and when Sophie discovers that the giant can’t read, the queen’s soldiers help her to find a solution to his problem…Sophie lives with her parents, a modern king (who wears an apron and does the housework) and queen, in a tiny house. Fairytales play an important part in their lives and there are references throughout the text to porridge, bears and a gingerbread house. Stories also play a big part in Sophie’s plan, they calm the giant so that eventually he can sleep without snoring.Caryl Hart’s bouncy, rhyming text is complemented by Sarah Warburton’s colourful and incredibly detailed illustrations which are full of humour. We love Sophie’s butler, a very dapper dressed mouse who pours tea, holds a torch in the dark and serves drinks and my daughter loves the giant’s bunny slippers. It amuses us that, despite their old, scruffy clothes, Sophie and her parents always wear their crowns and we love looking at the pictures in Sophie’s fairytale book.Sophie is a heroine that children will identify with, she’s a thoroughly modern princess who is moved to help the giant. She makes an extremely positive impact on his life and I love the way that, despite being so big, he is portrayed as having insecurities like everybody else. The giant’s  enthusiasm for reading and stories cements his friendship with Sophie and we love the way that his problems are solved by books and reading.Age Range: 3 +Author: Caryl Hart / Illustrator: Sarah WarburtonThank you so much to Caryl Hart for sending us a review copy of The Princess and the Giant. We love all the Princess books but this is our favourite so far. Published by Nosy Crow you can also listen to a podcast of the story which is a frequent accompaniment to our longer car  journeys.
Age 10, Age 3, Age 4, Age 5, Age 6, Age 7, Age 8, Age 9, Fairy Tale Characters, Humour, Nosy Crow, Rhyme