These beautifully illustrated, hardback books introduce us to a year in the life of children living in England or Scotland. The bold, bright illustrations and the easy to read text contain a wealth of information about children’s day to day activities, the food they eat and the traditions and holidays that they observe. 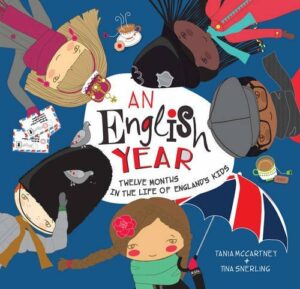 At the beginning of each book five children introduce themselves and tell us about their backgrounds, their interests and what they want to be when they grow up. The diversity of the populations is portrayed, several of the children and their parents have been born in different countries (e.g. Poland, Pakistan, Jamaica) and the initial greeting is in the child’s native language.

The books take us through the months of the year, each month being shown on a double page spread which is covered in illustrations supported by short pieces of informative text. They are perfect ‘coffee table’ books for children and adults alike. Although the language and the experiences are aimed at children I found them really interesting and also learnt about unfamiliar traditions.

There is so much information included in these books. Sporting events such as The Six Nations Rugby, Wimbledon and The An Fhèis Mhòr festival are included alongside traditional events such as Trooping the Colour and The Royal Edinburgh Military Tattoo. Significant dates such as World Teachers Day and Human Rights Day are depicted alongside familiar daily rituals such as getting to school and what children eat or do in their free time. Some of the information is duplicated in the two books as many traditions are the same or similar, e.g firework night, Christmas and Mothers’ Day but they are explained in a slightly different way using a different illustration. The illustrations are bold and colourful and many of them are reproduced as thumbnails in the beautifully designed chequered endpapers. 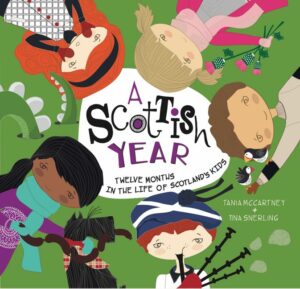 An English Year or A Scottish Year are great books to use in the classroom for a geography topic. The final pages of the books list the English counties or the Scottish regions and show maps of the whole country which are fascinating to peruse and include information about capital cities as well as pictures of famous landmarks. The books can also be used to stimulate discussion about months of the year as well as annual traditions and customs that children celebrate.

For British or Scottish children who don’t live in the UK or Scotland these books are a great introduction to parts of their heritage that they are unfamiliar with. An English Year has introduced our daughter to unfamiliar experiences, foods and traditions and has stimulated lots of discussion about my own childhood memories.

Thank you to Emma at Exisle Publishing for sending these beautiful books which we can dip in and out of throughout the year. We’ve found them an interesting and fascinating resource.

January 26th is Australia Day and you can learn more about Australian traditions, culture and customs in An Aussie Year – Twelve Months in the Life of Australian Kids.