Dec 16th: Tom Percival chooses Once Upon a Northern Night

The Story: Put simply it’s a story about the magic and wonder of seeing the ordinary, familiar world transformed by a snowfall.Why is this your favourite Christmas book?While many books and stories deal with this sense of the transformation of the ordinary through the appreciation of nature, I just feel transported whenever I look at this book. I have to say that for me personally it’s all about the illustrations – I just ADORE them (and that’s not the normal publishing use of the word ‘adore’ which so often means, ‘this is a thing that I’ve just seen on twitter and quite like.’).Can you describe a favourite illustration or give a favourite quote from the story and tell us why you chose it?There’s a spread where you see some hares playing on the left-hand side and a fox half in shadow in the facing spread. The economy of the illustrations and the spare use of colour is just fantastic – did I mention that I love the illustrations? 😉 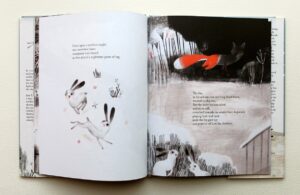 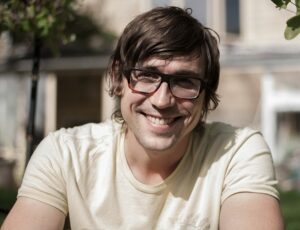 Tom Percival grew up in the wilds of Shropshire in a caravan with no sensible form of heating, no mains water and only sporadic electricity. The drinking water came from a container that collected spring water and Tom used to think that it was incredibly tedious to have to boil the water before drinking it – until he found a dead frog in there.

He now lives with his girlfriend and their two young children in a real house with stairs and everything!Tom on Twitter / FacebookTom’s BooksWhich book is on your Christmas wishlist this year?Hmm, tricky! There’s no one book that I’m especially keen to get, but I know that my Mum will buy me a couple and they’ll all be great! She always seems to know which books I’ll enjoy more than I do.Story Snug’s 2015 Advent Calendar on Pinterest
Bloomsbury, Macmillan, Spanish, Walker Books

One response to “Dec 16th: Tom Percival chooses Once Upon a Northern Night”