A Gold Star for George by Alice Hemming & Kimberley Scott

It’s the time of year for school sports days and although some schools now have non competitive sports days, others don’t. A Gold Star for George is a great book for showing children that winning isn’t everything and that other qualities are also important.The Story: At The Heavenly Hippos Wildlife Park gold stars are being awarded to animals in various categories. George has never won anything before but he has the perfect place for a gold star on his fence. George is very happy for his friends when they win their various categories but he goes to bed without a gold star. Next morning George gets a surprise and learns how it feels to be a winner. 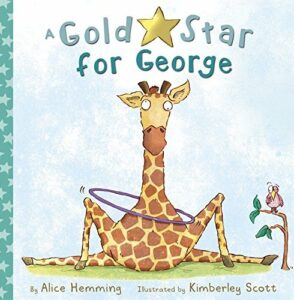 George is a giraffe (he first appeared in The Black and White Club) and he is friends with a variety of animals including lemurs, penguins, monkeys and elephants. Despite wanting to win a gold star he parties with the penguins when they win theirs and is also instrumental in helping the lemurs win their category. George is kind, graceful and helpful and although he doesn’t win a Heavenly Hippo Gold Star his friends reward his qualities by giving him stars of their own. The final illustration shows George wearing five gold stars including one for being helpful and another for being kind.The text in A Gold Star for George is printed in an easy to read font which is also good for a beginner reader. There is a lot of humour in Kimberley Scott’s illustrations which include a wide range of animals for younger readers to identify. My daughter’s favourite illustration shows George trying to win the ‘Best Trick’ award and I love the picture of the ‘Most Stylish Animal’ in which all the animals have copied George’s style!A Gold Star for George is a fantastic book to stimulate a classroom discussion about winning and not winning, something that can be very important to some children (and adults!). A lovely activity for children would be to make and give gold stars to their friends. Each child can take the name of a classmate out of a hat and write down a particular quality that they have e.g. friendly, helpful, caring. The stars could be displayed on a wall display alongside a photo of the child.A Gold Star for George is a great book for the classroom as well as an enjoyable story to read at home.Age Range: 2 +Author: Alice Hemming / Illustrator: Kimberley ScottThank you to Maverick for sending us a review copy of A Gold Star for George. We weren’t asked to recommend the book but we enjoy the story and love the way that it portrays an important message.
Age 2, Age 3, Age 4, Age 5, Age 6, Animals, Maverick Books