The Special Guest by Steve Smallman

Age Range: 4 to 7We love the way that Steve Smallman’s beautifully illustrated title page introduces the characters and sets the scene for The Special Guest, a humorous story about vanity, ingenuity and friendship.The Story: Zebra is excited as he has received an invitation to have dinner with Lion, King of The Jungle. Elephant tells him he can’t go but Zebra ignores him and while he is having a bath the invitation blows away. Porcupine thinks the invitation is for him as does Rhino. After having his hair cut and painting his stripes Zebra sets off. Meanwhile Lion hears a voice from the bushes saying his special guest has arrived but he’s disappointed to find it isn’t Zebra. By the time Zebra arrives Lion has been deceived three times by Zebra’s friends. Lion then admits that there is no special dinner, he just wanted to eat Zebra. Zebra realises how stupid he has been, thanks Elephant and apologises for being rude.Zebra really is a vain character and his preparations for dinner make us laugh, especially the haircut. Zebra accuses Elephant of being jealous as he is not ‘clever or beautiful’ like him but it is Elephant’s ingenious thinking which saves Zebra. Porcupine and Rhinoceros’s actions in saving Zebra caused us to say ‘Ouch’ but we laughed out loud when Elephant (in camouflage!) ensures that Lion confesses his real intention.The story is written in an easy to read font and the illustrations are full of humour. The animal’s expressions are brilliant at conveying their emotions, we love Porcupine’s expression when the invitation lands on his prickles and Lion’s expression when Elephant gets the better of him. Our favourite picture shows the monkeys helping Zebra to paint his stripes, Zebra is so engrossed in the task that he doesn’t see what Elephant is up to!The Special Guest would be a great book to include in a classroom topic on animals. Children can draw pictures of their favourite animal to show how the animal could stop Lion eating Zebra, the drawings and descriptions could then be incorporated into a class book. They could also write their own dinner invitations, Lion hasn’t specifically told Zebra what time dinner is or where it will be and his invitation could initiate discussion about what information is necessary to include on an invitation. There is also scope for discussion about camouflage and more specifically about zebras and their stripes (did you know that every single zebra has a unique pattern, like a human fingerprint?). Other ideas are given in the Next Steps section at the end of the book, it’s a great idea to include more ideas for parents and teachers who want to develop some of the book’s themes further.The Special Guest is a humorous and entertaining story which is great for introducing a range of themes to a reader.Author / Illustrator: Steve SmallmanThank you to QED Publishing for sending us a review copy of the book. We enjoyed reading it and think your Next Steps section provides great inspiration for extending the reading experience. 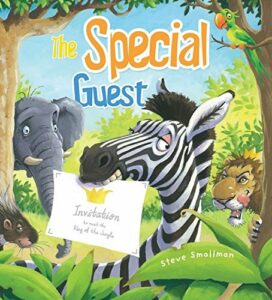 21 responses to “The Special Guest by Steve Smallman”