The Lost My Name books are sturdy and printed on thick, environmentally friendly paper. Each page is a double spread with beautiful, bold illustrations which complement the bouncy, rhyming text. The stories include a wide range of characters, in my name I have a Nabarlek, an Aardvark, a Troll, a Robot, an Imp, an Elephant and an Eagle (as I have a repeating letter I have two different characters for letter ‘E’). It is hard to choose favourite characters and spreads as we haven’t seen them all but we like the three eyed imp with his pink punky hair and we’re amused by the seal who thinks he’s a dog!

As the Lost My Name books are personalised books they are made to order and can be customised for any name. If you have a short name, extra pages will be inserted to extend the story. The Lost My Name books have been translated into French, German, Spanish and Dutch and you can also order a copy written in American English. Each country now has its own Lost My Name website (click on the links below for the country of your choice) where you can preview your book and find out more.

In Dutch the books are called Wat een Pech, mijn Naam is weg! 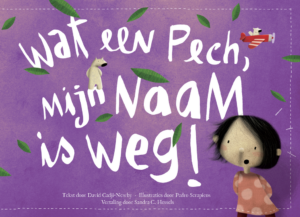 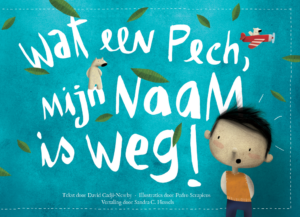